A family-owned Massachusetts market that has been in business for more than 100 years is officially closed.

Russo’s in Watertown was open for the final time from 8 a.m. to 6 p.m. Saturday.

Last month, owner Tony Russo announced that he would be retiring after working more than 70 years in the family business.

The business began as a small farm in Watertown over a century ago and offered fresh fruit, vegetables, organics, flowers, plants and more.

“I cried before I came in. I made myself look OK, and I’m going to cry more,” said Inna Konyavsky. “We came to the country back in ’94 and this was the first store we were introduced to, so I’ve been coming here for those times all the time.”

“Especially for the past year and a half, we’ve been working from home and it’s been so nice to be able to take a 10-minute stress break and run across and grab some fruit or do a little bit of grocery shopping,” said Anna Basevich.

“I moved here four years ago and the first thing someone said is: ‘You’ve got to go buy your Christmas tree at Russo’s.’ So I have really fond memories of bringing our family and buying our Christmas trees,” said Katherine Kranenburg. “I was very sad for the workers here. They all seem like they’re very united and I just thought about them and where they’re going to go. It’s like a family.” 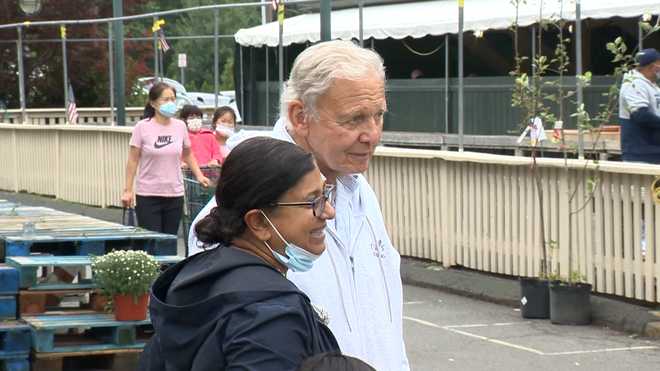 Tony Russo, the owner of Russo’s in Watertown, Massachusetts, takes a picture with a customer during the market’s final day of operation on Sept. 18, 2021.

Tony Russo had worked in all areas of the retail and wholesale business throughout the years with his days starting at about 3:30 a.m. and ending after 8 p.m. He worked alongside his grandparents on the farm and later with his father and uncle at their wholesale warehouse.

He told NewsCenter 5 that he feels sad when reflecting upon the decision to close Russo’s, but he is glad to have served his customers and the community throughout the years.

Russo’s entered the national spotlight when an employee, Gilly Assuncao, stunned shoppers and fellow workers with his singing voice during the 2017 holiday season. He was later accepted to attend the Berklee College of Music in Boston.

Shoppers wanting to take advantage of Memorial Day sales or just looking to pick up a few groceries are in luck. Unlike Christmas, Easter and Thanksgiving, most major retailers are open Monday with one super-sized exception – Costco Wholesale clubs are closed Monday like they are for many other holidays, including New Year’s Day, Easter, Independence Day and Labor Day. Memorial Day, which commemorates military personnel who…

NOW THAT Jeff Bezos’s space flight company Blue Origin has lost a multibillion contract to Elon Musk’s SpaceX, Congress is prepping the ground for Bezos to win a contract anyway, ordering NASA to make not one but two awards. The order would come through the Endless Frontier Act, a bill to beef up resources for science…

A Nottingham law student who thought her online boyfriend was a “catfish” has found out he is actually a Nigerian prince. Esther Akpovi found out about his identity after appearing on MTV’s Catfish UK. The 21-year-old told NottinghamshireLive : “It was an interesting opportunity and I guess I was just like ‘why not, let’s see how it…

Now customers can save time shopping for groceries by skipping the checkout line with the launch of our new Amazon Fresh grocery store with Just Walk Out shopping, now open in The Marketplace at Factoria in Bellevue, Washington. Veggies, fruit, meat, seafood, prepared foods, and pastries—all the amazing selection customers love and expect, with the…

The real estate company of a Newport Beach family has purchased the Balboa Fun Zone, saying it plans to bring the landmark back to its glory days. The sale to Chartwell Real Estate Development was announced this week by the Discovery Cube, a nonprofit science center in Orange County that had run its Ocean Quest center…

Not since Real Madrid’s famous ‘Galácticos’ squad of the 2000s has a single club boasted so much individual talent. Paris Saint-Germain’s dramatic capture of Lionel Messi — which will undoubtedly go down as one of the most shocking in football history — capped off what had already been an incredible summer of talent accumulation. But can this…